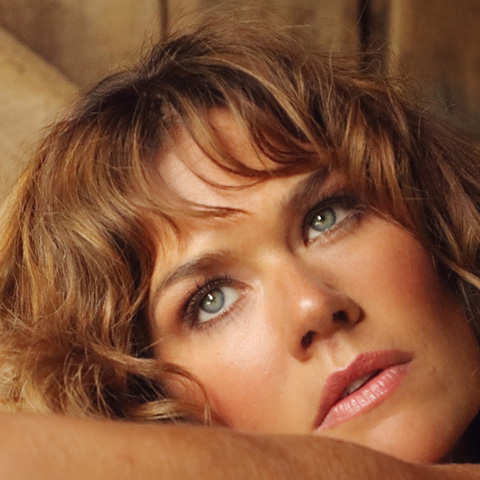 "I don't feel the need to fit my music into one category, because life doesn't fit into one category," says Ruthie Collins, whose songs swirl together a dreamy blend of folk, country, and achingly honest Americana. "I think we can live in a world right now where we can just be who we are." And who, exactly, is Ruthie Collins? Raised in Fredonia, New York, she grew up on her family's 15-acre grape farm, mere miles from the Lake Erie shoreline. Her childhood was a musical one, filled with the classical favorites of her mother — a professional pianist and organist — as well as her church choir's gospel selections. Ruthie's horizons expanded as she became enamored with the radio, developing a love for the pop and country songs whose larger-than-life hooks would soon inform her own writing. Following brief stays in Boston, where she studied music as a college student, and Texas, where she worked as a contemporary vocal director at the largest Lutheran church in America, she headed to Nashville, settling in a city whose diverse music community matched her own tastes. "I spent the next five years waiting tables to support my songwriting habit," she remembers. "Then in 2011, demos of some songs I'd written landed in the hands of Curb Records, and they reached out to sign me as both a writer and an artist. It took years, but suddenly my world changed overnight." A six-song EP marked her solo debut in 2014, followed by 2017's Get Drunk and Cry, 2020's Cold Comfort and 2021’s single “Hypocrite”. All three records embraced the full spread of Ruthie's influences, rolling her autobiographical storytelling into a mix of cinematic piano ballads, guitar-driven country standouts, and atmospheric Americana anthems. Ruthie's voice — an elastic instrument that channeled the emotional weight of her writing — served as the glue that bound each record together, and she spent years on the road, playing shows at festivals like Stagecoach and FarmBorough. LA Times praised her "sunny demeanor," while Rolling Stone raved that "Collins' voice has the fluttery nuances more common in Seventies Laurel Canyon than in modern country." Writing about the Cold Comfort track "Joshua Tree, Billboard praised the song's "ethereal vocals alongside soaring string features, minimal piano parts, and delicate percussion." An album about romance, relationships, broken hearts, and mended bridges, Cold Comfort was produced by Wes Harllee and mixed by GRAMMY-winner Ryan Freeland. Weeks after the record's April 2020 release, though, Ruthie found herself in western New York, riding out the initial wave of the Covid-19 pandemic at her mother's home. Shows were cancelled as the pandemic stretched for months, bringing Ruthie's plans to a halt. Asked by the BBC to record acoustic versions of the Cold Comfort tracks "Hey Little Girl," "Joshua Tree," and "Wish You Were Here," she tracked homemade renditions at her mom's place, highlighting the honest lyrics and rootsy hooks at the core of each song. All three acoustic versions appear on the extended version of Cold Comfort, released in 2021 on the heels of her standalone single "Hypocrite." Written with fellow road warrior Natalie Stovall in a 1973 Airstream trailer, "Hypocrite" showcases Collins at her best: occupying the uncharted territory between genres, swirling together the southern sounds of pedal steel and Telecaster guitar with the pop/rock punch of a meteoric chorus. It's a pained, powerful song about a broken relationship, but unlike most breakup songs, Ruthie spares her ex, reserving her harshest criticism for herself. "A relationship I really didn't want to end was clearly slipping away from me," she says of the song's creation process, "and even though I was trying to pretend I was ok with it all, I was a complete wreck on the inside. I hope 'Hypocrite' lets people know that even though we're all trying our best to keep it together, there's so much freedom in owning your emotions — in moving through them instead of blocking them — and that there is true healing and love on the other side." Honesty. Vulnerability. Authenticity. All three have anchored Ruthie Collins' work, serving as anchors for a career that continues to soar.