Rodney Atkins Announces Release of New Album, Caught Up In The Country, Out May 10, 2019

Current Radio Single, “Caught Up In The Country,” Top 30 at Country Radio

(Thursday, February 14, 2019) – Platinum Country music superstar Rodney Atkins announces his fifth studio album – Caught Up In The Country – set to release on May 10, 2019. The pre-order for the 12-track Caught Up In The Country launches today, along with the album’s second instant grat song, “My Life,” including its accompanying lyric video. To access the pre-order and music on all major digital platforms, including the lyric video, visit: http://smarturl.it/CUITCAlbum.

Atkins’ new music follows a season of personal renewal for the hit-making artist, which he credits for helping him to take stock not just of where he has been, but also where he is going. He married fellow performer Rose Falcon, and her impact – whether lyrically, in a duet, or just in spirit – is evident throughout Atkins’ new music.

Rodney and Rose wrote new song “My Life” after the passing of Rose’s grandmother, who was married to Rose’s grandfather for 71 years. Like Rodney, Rose’s grandmother was an orphan who had a rough beginning in life. On her deathbed, when she could no longer speak, she wrote “I loved my life” on a piece of paper – which Rose’s grandfather has since given to Rodney and Rose – then she passed on. The impact of the decades-long marriage and everything the story represents is the inspiration behind the beautiful love song.

Caught Up In The Country’s lead single and title track – which has over 70 million on-demand streams worldwide – features Atkins’ timeless twang while pushing boundaries through a thunderous beat and vocals from the Fisk Jubilee Singers, the historic a cappella vocal group consisting of students at Nashville’s Fisk University. The Boot called the song “Caught Up In The Country” a “contagious country anthem.”

With eight top 5 singles and six number 1 singles under his belt, Atkins is one of the most prominent country artists ever. His music is a unique voice in the country genre. Atkins has continued to be recognized as a powerful voice on country radio, with his Platinum-selling No. 1 “Watching You” earning the top spot on Country Aircheck’s top-played songs of the decade list. Atkins was the second most-played artist of the decade overall, and has amassed six No. 1 hits throughout his career. He has also sold over 13 million units, and was recently awarded with a plaque celebrating his nine career Gold, Platinum, and Multi-Platinum RIAA certifications to-date.

Caught Up In The Country Music Release Schedule:

Caught Up In The Country Track-Listing:

Caught Up In The Country Producers: 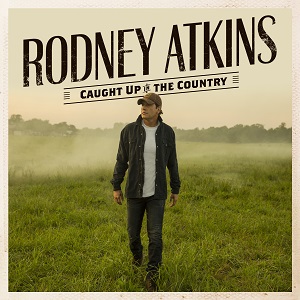