(Nashville, TN) – Two-time GRAMMY® award winning duo for KING & COUNTRY continue to set new personal benchmarks atop the Billboard charts. After tying massive hit “joy.” for the quickest rise to #1 in the duo’s history, recent single “God Only Knows” has accumulated 40 million streams and spent a total of six weeks at #1 on the Billboard Christian Airplay chart – the duo’s longest reign at the top of the Billboard charts to date. Additionally, “God Only Knows” spent its 12th week leading Australia’s TCM chart – setting yet another record for Joel and Luke Smallbone – and has spent multiple weeks atop Canada’s CCM chart.

“The response to this song has been absolutely overwhelming,” the Smallbones share in a statement. “With May being Mental Health Awareness Month, it feels timely to take a look at ourselves, the heavens above, and our relationships with one another. Every night we sing this song is a reminder that none of us are alone, no matter how lonely we might feel, because there’s a superhero type of love and acceptance that comes from above.”

The gripping and emotive music video for “God Only Knows” has been viewed over 21 million times, and you can watch the video HERE.

for KING & COUNTRY recently announced the burn the ships | world tour: North America, which will see the duo bring the bow of the proverbial “ship” to life with a thrilling new stage and lighting setup. They have sold out 22 shows on their burn the ships | world tour thus far, including the famed Sydney Opera House in their homeland of Australia, and earned three 2019 Billboard Music Awards nominations. The Smallbones perform at the top of the show, giving fans more music to sing along to than ever before – including every song from the burn the ships album. To purchase tickets and to find more information about for KING & COUNTRY’s upcoming tour, click HERE.

Two-time GRAMMY® award-winning Australian duo for KING & COUNTRY is comprised of brothers Joel & Luke Smallbone. October 2018 saw the release of their much anticipated third studio album burn the ships, a sweeping musical landscape that explores themes of new beginnings, forgiveness, hope, and love, which debuted at #7 on the Billboard Top 200 Albums chart. The album’s soaring GRAMMY® nominated debut single, “joy,” held the No. 1 spot for four consecutive weeks, marking the group’s highest debut on three Billboard charts. Their current single, “God Only Knows” has reached #1 on the Billboard Audience chart and has accumulated 40 million global on-demand streams, increasing the duo’s career on demand streams to 575 million. This marks for KING & COUNTRY’s fastest rise to No. 1 to date. To kick off 2019, Joel & Luke launched Part I of their burn the ships | world tour, performing in their Australian homeland for the very first time and selling out every show, including the iconic Sydney Opera House. Their previous album, the gold-certified RUN WILD. LIVE FREE. LOVE STRONG. debuted at No. 1 on iTunes, and produced two GRAMMYs®, four Dove Awards, a successful 60-date arena tour, and a world tour that has so far produced 22 sold out dates. They have garnered five No. 1 hits, nine Top 10 hits, and had songs featured on the Emmys, Super Bowl, Sunday Night Football and other high-profile events, including performances on The Tonight Show, Today Show, and Jimmy Kimmel Live! In October 2016, the Smallbone brothers released the indie film inspired by their No. 1 hit of the same name, Priceless, about human trafficking. 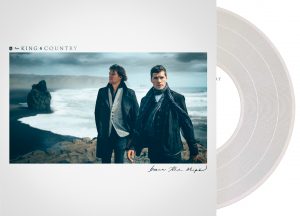