With a headlining summer tour, a packed-to-capacity performance at last week’s CMA Fest, and “Rumor” sitting at #3 on Billboard’s Hot Country Songs chart, Lee Brice is truly at the top of his game. Appropriately, the country hitmaker has also returned to the top of Spotify, Pandora, Apple and Amazon’s top playlists, matching his wide-ranging success on the road (and at country radio) with a strong digital presence.

Brice helped kick off the 48th annual CMA Fest on Thursday, June 6th, by bringing a capacity crowd to the Chevy Riverfront Stage in downtown Nashville. Weeks before his late-morning performance, Brice was the “most scheduled” artist on the CMA app, with more than 9,300 fans adding his Thursday show to their festival itineraries. “To say I’m humbled by this would be an incredibly huge understatement,” Brice said in a gracious Twitter post, adding, “This makes all the hard work and restless nights away from my boys, baby girl and my beautiful wife so worth it.”

Meanwhile, his single “Rumor” — hailed by Rolling Stone Country as “a sultry, R&B-tinged number that suits Brice’s burly growl” — continues to climb the country charts in America and abroad. Already a Number One hit on Australia’s CMC (Country Music Channel) Top 50 Chart, the song has remained on Billboard’s Hot Country Songs chart for 38 weeks, and currently sits at #3. Additionally, “Rumor” is currently the ninth most-played song across all genres on Pandora, having spent 20 weeks on the Pandora Top Spins chart. The song is experiencing a similar demand at Spotify, where “Rumor” has been streamed more than 60 million times. Globally, “Rumor” has racked up more than 175 million on-demand streams.

An endearing front man whose success is matched by his close connections with fans, Lee Brice will remain on the road for much of the summer, playing a mix of arenas, amphitheaters, and festivals. 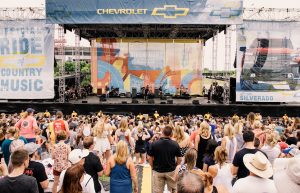