Show Will Now Be Livestream-Only Due To COVID-19 Concerns

Sidewalk Prophets has turned its historic sold-out Ryman concert into a livestream-only event. Originally, the band invited their “Great Big Family” to experience the gift of an exclusive free album preview and live performance at one of Nashville’s most revered venues, but have made the event livestream-only due to social distancing rules and COVID-19 concerns. The show will stream via Facebook Live on July 9, 2020 at 7 PM CST.

Though the plans for a live show have changed, the band is excited to have the opportunity to share this night with even more fans, as the livestream will allow those from all over the world to join in this once-in-a-lifetime experience. “We worked so hard on this event and were ready to have one of the most exciting nights of our career and then the pandemic hit and changed everything,” shares Sidewalk Prophets front man Dave Frey. “While we’re disappointed that we won’t be able to have a live audience for this show, we’re excited to share our first visit to historic Ryman Auditorium with fans from all over the world. We truly are a great big family, and we can’t wait to share our new album with everyone from the historic Ryman stage.”

During the sold-out show, fans will hear the entire The Things That Got Us Here album, releasing July 3, 2020, as well as get backstage access with the band. The show will be presented by Way-FM and Children International, a leading humanitarian organization focused on helping children break the cycle of poverty.

Children International, based in Kansas City, Missouri, is a global non profit humanitarian organization working to help end the cycle of generational poverty. Through a long-term, customized approach, Children International supports children and youth for the first two decades of their lives, providing access to information and inspiration in the areas of health, education, empowerment through life skills, and employment. When equipped to transform their own lives, young people also transform their families and communities, and as a result, multiply good in the world. For more information, go to www.children.org. 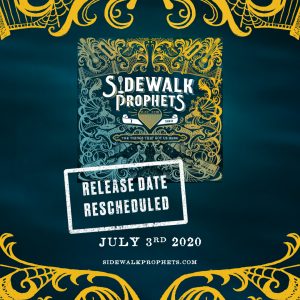