Congratulations to Carly Pearce and Lee Brice on their #1 for “I Hope You’re Happy Now”!! 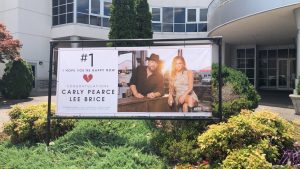 When current ACM Award-nominated and Curb Records recording artist Lee Brice isn’t selling out arenas, writing and recording songs, or building new brands like American Born whiskey, you’ll find the family man with his wife Sara, two young boys, and daughter. Meanwhile, with more than 1.9 billion on-demand streams, and three billion spins on Pandora, Brice continues to enjoy massive success at country radio, digital streaming services, and on the road. His latest mega-hit, “Rumor,” is nominated in the category Single of the Year at the 55th Annual ACM Awards. One of the most-played country artists of all time on Pandora, he is a member of the company’s “Billionaires Club,” becoming only the second country artist behind Keith Urban to receive the Pandora Billionaire plaque. Lee is also a GRAMMY nominee, a CMA nominee and a double ACM award winner, and he’s taken six radio singles to Number One: “A Woman Like You,” “Hard To Love,” “I Drive Your Truck,” “I Don’t Dance,” “Drinking Class,” and “Rumor.” Garth Brooks, Jason Aldean, Kenny Chesney and others have recorded his songs, and he’s performed on numerous TV shows, including NBC’s TODAY, ABC’s The Bachelor, NBC’s The Voice and FOX’s Miss USA 2018, and has performed as part of the Library of Congress Gershwin Prize for Popular Song honoring Garth Brooks. Brice – who is currently No. 1 at Country Radio with Carly Pearce on “I Hope You’re Happy Now” – is following the massive success of his hit “Rumor” with his current and fastest rising radio single to date, “One of Them Girls,” available now.

Carly Pearce’s kind of Country transcends the moment. Fiercely rooted in the classics, the girl who left her Kentucky home and high school at 16 to take a job at Dollywood has grown into a woman who embraces the genre’s forward progression. The diversity of Carly’s connection saw her win CMT Music Awards’ Breakthrough Video of the Year and Radio Disney Music Award for The Freshest! – Radio Disney Country Best New Artist, plus tours with Blake Shelton, Rascal Flatts, Luke Bryan and Jason Aldean. The down-to-earth female vocalist has quickly carved out her own highly honest, emotionally compelling place in a very Pop-Country world. For updates, visit CarlyPearce.com.