Unrest over policing following the George Floyd killing this summer was the backdrop of a conversation that is leading to new opportunities for students interested emergency services careers.

Music mogul and philanthropist Mike Curb shared with Daytona State College President Tom LoBasso this about his father’s law-enforcement career: He never had to fire his gun.

“My dad was an FBI agent. He didn’t get to make very much money, but he was a great man,” Curb said Thursday, hours before the Daytona State College Board of Trustees discussed a contract spelling out the the renaming of its School of Emergency Services for Charles M. Curb.

DSC is expected in December to ratify the deal that would support the school that trains local police, firefighters and emergency medical technicians with a $750,000 gift from the Mike Curb Foundation.

Curb — a songwriter and music producer, a race-car owner as well as the former interim governor of California — previously donated $500,000 to Daytona State, gaining the naming rights for the Mike Curb College of Music, Entertainment and Art.

LoBasso said the $500,000 chunk for emergency services will roughly support 25 scholarships of $1,000 apiece for students.

“We’re grateful for Mike’s support,” LoBasso said Thursday. “With everything going on this summer, we were talking and Daytona State College is the training facility for law enforcement in Volusia and Flagler counties. … We think this scholarship money can help us with recruiting and enhancing programs to really make our police academy the best in the state.”

“We need a very new, diverse group of talent in the areas of music and entertainment and emergency services,” Curb said in a phone interview with The News-Journal. “This is a real opportunity for Bethune-Cookman and Daytona State to work together.”

Curb’s view on making law enforcement better ties together good training, diversifying the men and women who make up police forces and community policing. He linked the naming rights to his father as a tribute.

“He had a wonderful policy: The important thing of wearing a gun is if you do it right, you never have to use it,” Curb said. “It was because of his training back then.”

Charles M. Curb was field officer for the FBI in Savannah, Georgia, where Mike Curb was born. The family later moved to California, and when Curb was 19, he wrote his first hit song, “You Meet the Nicest People on a Honda (Go Little Honda).”

And, after winning office as California’s lieutenant governor in 1978, he served a term in office that saw, in part, then-Gov. Jerry Brown running for president, so Curb was called into duty as interim governor. But he lost a bid for re-election in 1982 and California has not elected a Republican lieutenant governor since.

Curb also became involved in auto racing. In July 1984, he owned the Richard Petty car that won the Firecracker 400, a race attended by Curb’s friend, President Ronald Reagan. He has remained in the auto-racing business, and owned the winning truck at the 2020 NextEra Energy 250 at Daytona International Speedway.

His philanthropy led to the Mike Curb Foundation, which has given more than $100 million to schools in and around Nashville, Tennessee, in California and Daytona Beach, as well as community projects targeting homelessness and historic preservation.

Top Photo:  Mike Curb (left) and L. Gale Lemerand pose for a photo at a speaking engagement for Curb in Daytona Beach in 2013. News-Journal File 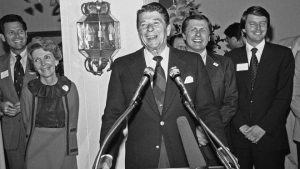 California Lt. Gov. Mike Curb, right, joins presidential hopeful Ronald Reagan, center, and others during a reception at Anaheim Stadium on June 2, 1980.  Curb, whose careers in politics, music and auto racing have helped him amass a fortune, has also become a philanthropist and made significant donations to Daytona State College, Bethune-Cookman University and other schools. AP Photo/McLendon 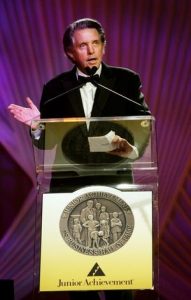 Mike Curb of Curb Records talks about William H. G. France who was inducted in to the U.S. Business Hall of Fame, a part of Junior Achievement’s annual induction activities at Gaylord Opryland Resort April 9, 2008.  Larry McCormack / The Tennessean