Nashville, TENN. – On Tuesday, December 15th, four-time GRAMMY Award-winning duo and Curb | Word Entertainment recording artist for KING & COUNTRY held the “Drummer Boy Christmas – Live in Concert” streaming event. The spectacle garnered over ONE MILLION views since airdate and featured incredible performances from mountaintops, special guest appearances, and exclusive stories told by the duo to help lead the holiday season in. To get a sense of the breathtaking event and to see the night’s biggest moments, check out the highlight reel here.

If you’d like to watch “Drummer Boy Christmas – Live in Concert” in its entirety, the stream is available here.

Following a sterling performance that brought the Christmas spirit straight to Nashville’s Grand Ole Opry House, for KING & COUNTRY have been asked to return to the historic venue in midwinter 2021. for KING & COUNTRY – Christmas at the Opry House will offer a holiday marvel to concertgoers for a second year in a row, with intricate set designs and powerful performances in store. Tickets are on sale TODAY, for more information click here. 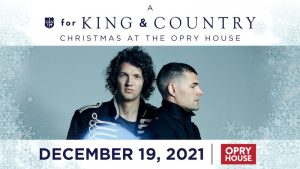 for KING & COUNTRY are in the home stretch of the wildly successful A Drummer Boy Drive-In: The Christmas Tour, finishing up the tour on December 20th in Pensacola, FL. Teaming up with The Salvation Army and their Rescue Christmas initiative, concert goers brought new, unwrapped toys that were collected by local Salvation Army representatives. Thus far, there has been an average of 200 gifts donated per show that will be sent to children in need during the holidays. A Drummer Boy Drive-In has SOLD OUT 16 dates, selling over 11,000 car tickets throughout the tour.