Curb | Word Entertainment Recording Artist Love & The Outcome Return With New You Got This EP March 6, 2020

Curb | Word Entertainment recording artist, and husband and wife duo, Love & The Outcome return with new music March 6, 2020, with the release of six-song EP, You Got This. In the meantime, fans can preview two of the upcoming EP’s original tracks with today’s release of the retro-inflected “Same Page,” and the anthemic “Moving On,” available on all digital platforms now.

“Chris and I wrote ‘Moving On’ in a season of feeling stuck,” shares Jodi King. “In the middle of our frustrated prayers God reminds us that even when we feel stuck, He is still moving. As believers, we’re never really stuck, we’re just on pause for God’s perspective. Once we get a glimpse of what He’s up to, freedom comes flooding in.”

Love & The Outcome’s You Got This EP is now available for pre-order/pre-save and takes its title from the duo’s current single, sitting inside the Top 20 on the Mediabase Christian chart. The couple recently debuted a music video for the song, in which their two young sons, Milo and Ziggy, steal the show. Watch the official clip for “You Got This” HERE.

In addition to debuting new music, Love & The Outcome’s Jodi King and Chris Rademaker will continue releasing regular episodes of their popular podcast that premiered in 2018. The podcast—available on Spotify and Apple Music—features the couple discussing relevant topics, offering encouragement and inviting listeners into their creative process. Recent guests include respected Christian authors Bob Goff and Rebekah Lyons. In March, Love & The Outcome will join 7eventh Time Down and Rhett Walker on the Ultimate Playlist Tour.

For more info and all tour dates, visit www.loveandtheoutcome.com. 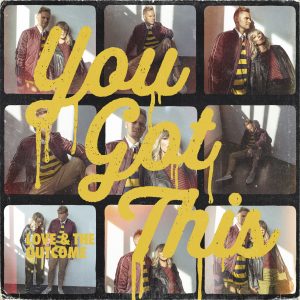 Pre-order the You Got This EP HERE, and pre-save the EP HERE.

You Got This EP Track Listing:

*Additional dates to be announced. All dates and cities subject to change.

Hailing from Canada, Love & The Outcome is the husband and wife duo of singer/songwriter Jodi King and bass player/songwriter Chris Rademaker. After signing to Curb | Word Entertainment in 2012, they retreated to the mountains of Washington state to record their powerful self-titled debut album. Love & The Outcome released on August 27, 2013 to critical acclaim, and the duo has since become a mainstay at Christian radio and shared the stage with the likes of Newsboys, Switchfoot, Lecrae, TobyMac, and more. Their highly-anticipated sophomore album took the duo into a grateful, restful and celebratory season with songs that encompassed a unique mix of worship, praise and declaration. These Are The Days, produced by Seth Mosley and Colin Munroe, includes the hit single, “The God I Know.” Released in late 2018, the deluxe version of the album includes features from hip-hop artists Ty Brasel and Steven Malcolm, new covers, and more. Love & The Outcome will release new EP, You Got This, on March 6, 2020.