“TOGETHER: A NIGHT OF HOPE” – for KING & COUNTRY PRESENTED EMOTIONAL AND POIGNANT STREAMED CONCERT EVENT FILLED WITH SPECIAL GUESTS, A NEW SONG, & OTHER SURPRISES

Earlier tonight, four-time GRAMMY® award-winner and Curb | Word Entertainment recording artist for KING & COUNTRY presented an extraordinary streamed concert event filled with music, stories, and special guests. “TOGETHER: A Night of Hope” featured an exclusive for KING & COUNTRY performance with Australian brothers, Joel and Luke Smallbone, and their bandmates from their respective homes presenting six songs, including one never-before-released tune, via split-screen. It was important for the duo to be “together” with their fans and bring a sense of hope during this unprecedented time.

Kathie Lee Gifford and Kirk Franklin were on hand via FaceTime to offer their own words of experience and encouragement. “TOGETHER: A Night of Hope” accrued over 90K live impressions and has already been viewed over 1 million times across all social platforms. Watch the entire event via YouTube or Facebook Live.

Joel and Luke Smallbone share in a statement: “Never in our lifetime has the entire globe been separated and in pain simultaneously like this. There can be great uncertainty in what we should do and how we can help. We can love, we can have hope in the face of fear, and we can reach out to those who need to be lifted up. It is a time in which we can choose ‘togetherness’ even while we are physically apart. We hope that “TOGETHER: A Night of Hope” was a respite for you in this unsettling time and thank you all for spending your evenings with us. We are stronger together.”

One of the most touching moments of the night came when Joel and Luke video-conferenced a couple whose wedding was postponed due to the ongoing pandemic. Upon learning that the couple was set to walk down the aisle to an arrangement of the duo’s “Burn the Ships,” Joel, Luke, and the band shared an inspired rendition of the song, as the couple affectionately looked on. for KING & COUNTRY treated viewers to a surprise, as the night ended with the performance of a brand-new, unreleased track called “Together.”

Setlist from “TOGETHER: A Night of Hope”: 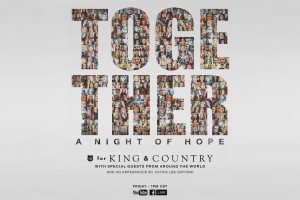