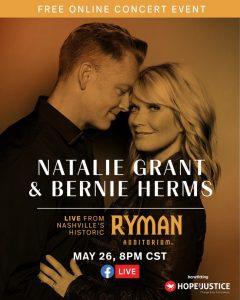 Curb | Word Entertainment recording artist Natalie Grant, along with her husband, GRAMMY AwardÒ-winning songwriter and producer, Bernie Herms, are excited to announce a free online concert event, live from the iconic Ryman Auditorium in Nashville, Tenn. on Tuesday, May 26, 2020 at 8 pm CT. The special event, which is benefitting Hope for Justice, will stream via Facebook Live on Natalie Grant’s page, and is the culmination of Natalie and Bernie’s “A Song A Day Keeps The Crazies Away” series, which has garnered 30 million streams since March 17.

Like everyone else, Grant and her family have been heeding statewide stay-at-home orders in an effort to stop the spread of COVID-19. During the quarantine, she and her husband, GRAMMY® Award-winning songwriter and producer Bernie Herms, have developed the daily ritual of gathering around their piano for a single song, which the couple shares across Grant’s Facebook (@nataliegrantmusic) and Instagram (@nataliegrant) accounts. Every day, the talented couple performs one of Grant’s hits from her celebrated catalog, a favorite cover, or a hand-picked hymn.

Additionally, Grant, along with her longtime friend, author and speaker Charlotte Gambill, have announced the new “Dare To Be” podcast in partnership with AccessMore, an all-new online platform for faith-based podcasts that launched yesterday, May 18, 2020, from K-LOVE/Air1 parent company Educational Media Foundation (EMF).

The new weekly podcast will bring Grant and Gambill’s popular “Dare To Be” women’s events to life in a fresh format, where the two friends will cover a wide range of relevant topics through honest and raw conversations rooted in Scripture, helping listeners become all God has created them to be. Episodes of the “Dare To Be” podcast will air every Tuesday, beginning today, May 19. Fans can subscribe to the “Dare To Be Podcast” at www.daretobe.com.

In addition to co-hosting the new podcast, Grant is hard at work on new music. In February, she previewed her next studio album with the release of “My Weapon,” which is currently Top 25 and climbing at radio. The five-time GMA Female Vocalist of the Year recently unveiled an official lyric video for the powerful worship anthem. Watch the visual HERE. The lyric video follows the official music video of “My Weapon (Sacred Version),” which was recorded live at AIR Lyndhurst Hall in London. Watch the official music video HERE. Grant will continue to drop new tracks in the coming months leading up to the highly anticipated release of her next full-length project, slated for late Summer 2020.

Eight-time GRAMMY® nominee Natalie Grant has remained one of Christian music’s top-selling artists since her 2005 breakout RIAA Gold-certified album, Awaken. Having been named Female Vocalist of the Year by the Gospel Music Association five times, Grant has propelled multiple singles and records to the #1 spot on the Billboard album charts, including her most recent album, Be One. Along with her friend Charlotte Gambill, she launched Dare to Be, a series of special one-night events for women. In addition, she’s the author of multiple books, including the Glimmer Girls series for tween girls. A fierce advocate for social justice, she’s also the co-founder of Hope for Justice, an international non-profit organization with 32 offices spanning 10 countries that works to end modern-day slavery. The singer and her husband, GRAMMY® Award-winning songwriter/producer Bernie Herms, live in Nashville with their three daughters. Grant’s powerful new single, “My Weapon,” serves as the first taste of new music from the singer’s next studio record, arriving late Summer 2020.