Joel and Luke Smallbone, the brothers that make up for KING & COUNTRY, share in a statement:

“2020 has been a year that none of us will forget, and through these times it’s given us a new perspective about life, but also about music and the role that it plays. Music has been one of the things that has comforted and helped provide healing to hurting people all over the world and for us. It feels as though the message of ‘God Only Knows’ rings truer now than when we wrote the song. Yes, ‘God Only Knows’ what we’ve all been through in 2020, but despite all of that, we believe there is still a kind of love that ‘God Only Knows.’ To the Billboard Music Awards for the nominations and for continuing to recognize the power of music in such desperate times as these, we say a heartfelt ‘thank you very much.’ We’re most grateful!”

This exciting news comes on the heels of a fruitful summer for Joel and Luke. After kicking off Ryman Auditorium’s first ever “LIVE AT THE RYMAN” exclusive livestream – which was included in a CBS Sunday Morning profile, the duo recently celebrated the honor of one billion total on demand streams and saw their hit track “TOGETHER” reach No. 1 on the charts for five weeks. “TOGETHER” has broken Top 25 on the mainstream charts, sitting at No. 16 on the AC chart and No. 24 on the Hot AC chart. for KING & COUNTRY will be performing a mix of livestream and drive-in shows throughout the country over the next few weeks. Click here for more information.

for KING & COUNTRY has recently announced its first ever full-length Christmas album, A Drummer Boy Christmas, due out on October 30th. Stemming from a concept that originated near the start of the band, A Drummer Boy Christmas includes 13 tracks and features two original Christmas songs entitled “Heavenly Hosts” and an emotionally moving ballad from Joseph’s perspective “A Carol of Joseph.” You can pre-save, pre-add, and, pre-order the album HERE.

Four-time GRAMMY® award-winning Australian duo for KING & COUNTRY, comprised of brothers Joel & Luke Smallbone, have released a new chart-topping hit “TOGETHER” – a song about the strength of unity in the face of adversity. Earlier in 2020, in response to the COVID-19 pandemic, the duo hosted the critically acclaimed livestream event “TOGETHER: A Night of Hope” to over 2.5 million viewers across all social media platforms. After collaborating with renowned entertainer Dolly Parton to release a version of the duo’s 11-week No. 1 hit “God Only Knows” in 2019, the duo won two 2020 GRAMMY® awards. “God Only Knows” (with Dolly Parton) won in the Contemporary Christian Music Performance/Song category, and their 3rd studio album, burn the ships, won a GRAMMY® in the Contemporary Christian Music Album category. for KING & COUNTRY graced the CMA stage to perform “God Only Knows” with the incomparable Dolly Parton at the CMA awards, and they performed their unique and powerful rendition of “Little Drummer Boy” at CMA Country Christmas, receiving national critical praise for both. They have garnered seven No. 1 hits, ten Top 10 hits, six GRAMMY® nominations, five Billboard Music Award Nominations, an American Music Award nomination, and had songs featured on the Emmys, Super Bowl, Sunday Night Football and other high-profile events. National television performances include Good Morning America, The Tonight Show, TODAY, Jimmy Kimmel Live!, The View, CMA Awards, and CMA Country Christmas. The duo’s burn the ships | world tour has SOLD-OUT over 40 shows across the world including USA, Australia, Germany, Netherlands, and New Zealand. In total, for KING & COUNTRY has accumulated nearly 1 Billion on-demand streams. 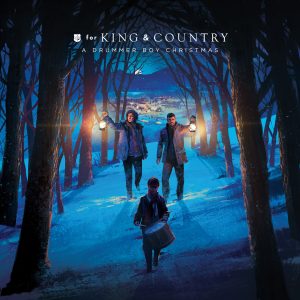 1. In The Bleak Midwinter (Prologue)
2. Joy To The World
3. O Come, O Come Emmanuel (feat. NEEDTOBREATHE)
4. Won’t You Come
5. Heavenly Hosts
6. Silent Night
7. A Christmas Monologue
8. Little Drummer Boy
9. The Carol Of Joseph (I Believe In You)
10. O Come All Ye Faithful
11. Go Tell It On A Mountain (feat Gabby Barrett)
12. Angels We Have Heard On High
13. In The Bleak Midwinter (Epilogue)