Joel and Luke Smallbone, the brothers that make up for KING & COUNTRY, share in a statement: “Never in our career had we seen such gifted artists believe in and collaborate on a song like ‘God Only Knows’… from Dolly to Timbaland to Echosmith to R3HAB… And fittingly, with the unprecedented nature of this track, never in our career have we won a Billboard Music Award! So, to our most wonderful musical partners who each brought their own heart and passion and lent their voices (or bests) and took this hope-filled message worldwide, we say a heartfelt ‘thank you’ and we share this acknowledgment with you! And to the 2020 BBMA’s – we send our love and respect and gratitude.”

“God Only Knows” has proven to be one of for KING & COUNTRY’s most enduring and popular hits, punctuated by a GRAMMY Award® winning collaboration with world renowned entertainer Dolly Parton and subsequent performance of the hit track at the 2019 CMA Awards.  Appearing on the GRAMMY Award® winning album burn the ships, “God Only Knows” has gone on to help the band achieve unprecedented heights, reaching No. 1 for 11 weeks while earning Platinum certification from the RIAA earlier this year. The song has led for KING & COUNTRY to some memorable partnerships with the likes of Timbaland, Echosmith, and R3HAB in addition to Dolly Parton. In total, the poignant music video for “God Only Knows” has received over 44 million YouTube views, and the track has accumulated a total of 166 million on-demand streams. Check out the music video for “God Only Knows” HERE.

With the holiday season approaching, for KING & COUNTRY has new music on the way in the form of its first Christmas album A Drummer Boy Christmas, out October 30th, featuring two new original Christmas songs. Next month, the duo will embark on A Drummer Boy Drive-In: The Christmas Tour that will see them support The Salvation Army with a national toy drive. Concertgoers can bring new, unwrapped toys that will be collected by representatives from the local Salvation Army and distributed to families struggling during the holiday season. For tickets and more information, click here.

Four-time GRAMMY® award-winning Australian duo for KING & COUNTRY, comprised of brothers Joel & Luke Smallbone, recently took home its first Billboard Music Award for the duo’s 11-week No. 1 hit “God Only Knows.” Earlier this year, they debuted their single “TOGETHER” (feat. Kirk Franklin and Tori Kelly) on Good Morning America. “TOGETHER,” which is about the strength of unity in the face of adversity, went on to become a multi-week No. 1 hit single. Earlier in 2020, in response to the COVID-19 pandemic, the duo hosted the critically acclaimed livestream event “TOGETHER: A Night of Hope” to over 2.5 million viewers across all social media platforms. After collaborating with renowned entertainer Dolly Parton to release a version of “God Only Knows” in 2019, the duo won two 2020 GRAMMY® awards. “God Only Knows” (with Dolly Parton) won in the Contemporary Christian Music Performance/Song category, and their 3rd studio album, burn the ships, won a GRAMMY® in the Contemporary Christian Music Album category. for KING & COUNTRY graced the CMA stage to perform “God Only Knows” with the incomparable Dolly Parton at the CMA awards, and they performed their unique and powerful rendition of “Little Drummer Boy” at CMA Country Christmas, receiving national critical praise for both. They have garnered seven No. 1 hits, ten Top 10 hits, six GRAMMY® nominations, five Billboard Music Award nominations, an American Music Award nomination, and had songs featured on the Emmys, Super Bowl, Sunday Night Football and other high-profile events. National television performances include Good Morning America, The Tonight Show, TODAY, Jimmy Kimmel Live!, The View, CMA Awards, and CMA Country Christmas. The duo’s burn the ships | world tour has SOLD-OUT over 40 shows across the world including USA, Australia, Germany, Netherlands, and New Zealand. In total, for KING & COUNTRY has accumulated over 1 Billion on-demand streams. 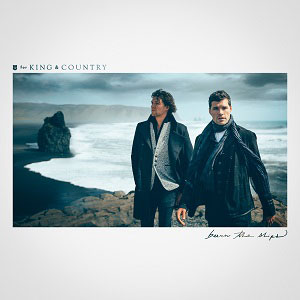