Plaques Presented to Brice Include Recent RIAA and Airplay Accomplishments

Curb Records recording artist Lee Brice was surprised and presented with RIAA certification and airplay plaques acknowledging his recent accomplishments. The surprise took place on his family farm before a celebratory fly-over by All Veteran Group, founded by Golden Knight Mike Elliot, who completed three tandem skydives with former President George H. W. Bush, and in conjunction with Window World, for Brice and his team to watch.

Joined by his team and partners, including Red Light Management, Curb Records, Window World and All Veteran Group, Brice was surprised and presented with plaques for “One Of Them Girls” staying #1 on the Country airplay charts for 3 consecutive weeks and earning the RIAA Gold certification, as well as a career plaque for 16 RIAA certifications representing 22 million units; Brice’s “Rumor,” “Hard To Love,” and “I Don’t Dance” are recently RIAA certified 3 times Platinum, while “Love Like Crazy” is now RIAA certified 2 times Platinum, and “Parking Lot Party” is RIAA certified Platinum. “One Of Them Girls” and Lee Brice, Brice’s last studio album, are now RIAA certified Gold, as well. Twelve consecutive radio singles released by Brice have now been RIAA certified.

Brice’s celebration comes fresh off the announcement of his latest album, Hey World, available November 20, 2020, and the release of his latest single, “Memory I Don’t Mess With.” Hey World is a 15-track album releasing in the middle of one of the most unique times in modern history, and who better to provide our soundtrack than Lee Brice. “With everything that is happening in the world currently, and how fast-paced we are as a society in general, sometimes you just want everything to stop, just to appreciate what we do have,” Brice shares about his upcoming project.

Off the upcoming project, Hey World, “I Hope You’re Happy Now,” “One Of Them Girls,” and “Memory I Don’t Mess With” are currently available. Pre-order/pre-save/pre-add the digital, CD, or vinyl of Hey World HERE. 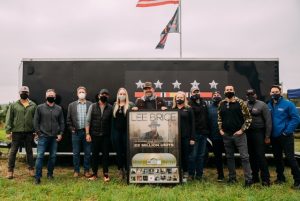 When current CMA Award-nominated and Curb Records recording artist, Lee Brice, isn’t selling out arenas, writing and recording songs, or building new brands like American Born whiskey, you’ll find the family man with his wife Sara, two young boys, and daughter. Meanwhile, with over 2.3 billion on-demand streams, and three billion spins on Pandora, Brice continues to enjoy massive success at country radio, digital streaming services, and on the road. He recently reached #1 at Country Radio with “One of Them Girls” (3 straight weeks BB, 2 straight weeks MB/BB), which follows his #1 with Carly Pearce on “I Hope You’re Happy Now,” and his #1 just prior to that, “Rumor,” which was nominated in the category Single of The Year at the 55th Annual ACM Awards. One of the most-played country artists of all time on Pandora, he is a member of the company’s “Billionaires Club,” becoming only the second country artist behind Keith Urban to receive the Pandora Billionaire plaque. Lee is also a GRAMMY nominee, CMT Music Award nominee, a CMA and ACM award winner, and he’s taken eight radio singles to Number One: “A Woman Like You,” “Hard to Love,” “I Drive Your Truck,” “I Don’t Dance,” “Drinking Class,” “Rumor,” “I Hope You’re Happy Now,” and “One Of Them Girls.” Garth Brooks, Jason Aldean, Kenny Chesney and others have recorded his songs, and he’s performed on numerous TV shows, including NBC’s Today, ABC’s The Bachelor, NBC’s The Voice and FOX’s Miss USA 2018. Lee performed as part of the Library of Congress Gershwin Prize for Popular Song honoring Garth Brooks, aired on PBS March of 2020. Lee’s current radio single, “Memory I Don’t Mess With” is from his upcoming album, Hey World, which releases November 20, 2020.