reputation as an innovative solo artist with “Everybody Knows (feat. Wale)” Listen to the new track HERE.

Released today, “Everybody Knows (feat. Wale)” is a beat-driven soul song about the magnetism between two soon-to-be lovers. It’s a modern track rooted in Williams’ old-school influences, with blasts of brass that

highlight his longtime funk influences and a piano progression that nods to his gospel-singing past. Gluing the mix together is the voice that made Tony Williams world famous — a soulful, show-stopping instrument that began earning global attention in 2004, when Williams appeared on Kanye West’s multi-platinum debut, The College Dropout.

In addition to his ongoing work with Kanye West, The WRLDFMS Tony Williams has duetted with gospel legend Patti LaBelle, recorded with Jay-Z, performed with Rick Ross, and written songs for Nas. It’s been a diverse career, netting Williams five GRAMMY® Awards and a wide-ranging audience. “Everybody Knows (feat. Wale)” finds him continuing to work in that collaborative spirit, blending his melodies with rapped verses from guest artist Wale. The result is a track that blends modern R&B and hip-hop with classic influences.

“My new sound is my old sound,” says Williams, who recorded “Everybody Knows (feat. Wale)” with the production team THEVAMP. “I’ve built a fanbase by appearing on hip-hop records, but I have roots in church music. I was raised during an era of bands — an era where people made organic sounds with real instruments — and I still like performing with that full presentation. I’m a fan of real songwriting, real sounds, and complex melodies. That’s where I started, and that’s where I’ve returned full-circle with ‘Everybody Knows.’”

Following solo releases like King or the Fool – An Opera: Volume 1, “Everybody Knows (feat. Wale)” marks a soulful return-to-form from an artist whose songs bridge the gaps between R&B, gospel, funk, and forward-thinking pop. 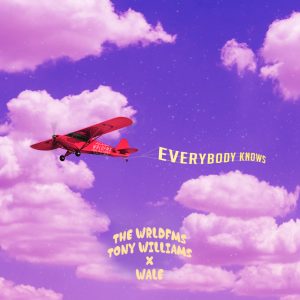 About The WRLDFMS Tony Williams:

The WRLDFMS Tony Williams is a five-time Grammy Award winning artist, known for his acclaimed solo work as well as his featured appearances on songs by Jay Z, Kanye West, Nas, and others. A soulful innovator whose music bridges the gaps between R&B, gospel, funk, and forward-thinking pop, he made his national debut on Kanye West’s multi-platinum debut, The College Dropout, which featured Williams’ vocals on multiple tracks. Released in 2004, the album launched both artists’ careers. Williams contributed to Kanye’s subsequent six albums while collaborating with dozens of other artists, utilizing his talents not only as a vocalist, but also as a songwriter. He sang on Jay Z’s “A Star Is Born,” duetted with gospel queen Patti LaBelle, and co-wrote “Bonjour” for Nas. More importantly, he continued creating his own music, marking his solo debut with 2012’s King or the Fool – An Opera: Volume 1 — an album that featured collaborations with John Legend, Raheem DeVaughn, and Mint Condition’s Stokley Williams — and turning a new leaf with 2021’s “Everybody Knows,” recorded alongside rapper Wale.