Wyn Starks To Embark On “Who I Am Tour”

Sidewalk Records recording artist Wyn Starks is excited to embark on his “Who I Am Tour” on the heels of his recent America’s Got Talent performance, which received two standing ovations, and his performance at the Minnesota Vikings Crucial Catch Halftime Show. Fans can purchase tickets for the tour, watch Starks’ America’s Got Talent audition, and learn more about Starks HERE.

During the “Who I Am Tour,” Starks, one of Pop music’s newest up-and-coming stars, will perform powerful original songs as well as festive holiday favorites in an intimate performance fan won’t want to miss. Starks can be found traveling the country, performing in Los Angeles, CA, New York City, NY, and Nashville, TN, among others. Purchase tickets for the “Who I Am Tour” HERE. Starks’ current single, “Who I Am,” continues to rise at radio, where it is charting at three different formats: Adult Contemporary, Adult Top 40 and Adult R&B.

“I’m so excited to get out to these cities that have already been so supportive of me and my music,” shares Starks. “The band sounds incredible and we can’t wait to play songs from my album along with some holiday favorites to ring in the season. This will be a tour I’ll remember for the rest of my life.”

Starks took to “America’s Got Talent” this season to share parts of his personal story, and his unmistakable singing abilities, performing his original song “Who I Am” in tribute to his late twin brother. Reaction from the judges and fans alike was swift, unmistakable, and inspiring, moving Sofia Vergara to tears and seeing the audience give not one, but two standing ovations, all ending in a unanimous ‘yes’ from the judges, moving him into the semi-finals. Watch Starks’ incredible audition HERE. Starks also performed “Who I Am” as part of the Minnesota Vikings Crucial Catch Halftime Show, in honor of those battling cancer, on 10/9 as they took on the Chicago Bears.

Just before Starks takes off on his “Who I Am Tour,” he will be performing as part of Live In The Vineyard at Hyde Winery in early November.

Purchase tickets for the “Who I Am Tour” HERE. Learn more about Starks HERE. 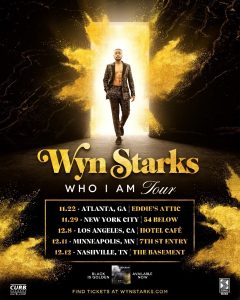 Black is Golden blends throwback grooves with contemporary moves, nodding not only to Starks’ past — including his upbringing in Minneapolis, Minnesota, where he sang his first solos in church — but also the innovative sounds he discovered upon relocating to Nashville. He began releasing songs that celebrated love, life, and inclusivity, earning nearly 2 million streams for his debut single, 2019’s “Circles.” From there, his sound deepened to include tracks of justice and racial equality, all while maintaining his unique blend of vintage influences and progressive pop hooks.

Released in 2020, the EP Who I Am showcased an artist whose music is simultaneously personal and universal. One year later, Black is Golden continued that balancing track. The album is both a rallying cry for people of color and an inclusive call to the dance floor for all races, and its broad mix of music — including gospel ballads, rhythmic bangers, soul classics, and dazzling pop anthems — strengthen the album’s central message of diversity.

Celebrating 58 years in business, Curb Records is one of the world’s leading independent music companies. Owned and operated by Mike Curb since 1964, Curb Records has achieved 435 number-one records, over 1,500 Top Ten records and charted over 4,500 total records. With over a half century in operation, Curb Records has been influential in the careers of some of the biggest names in music, including: Tim McGraw, Hank Williams, Jr., Rodney Atkins, Lee Brice, LeAnn Rimes, The Judds, Dylan Scott, Sawyer Brown, Wynonna, Lyle Lovett, Jo Dee Messina, Hal Ketchum and Desert Rose Band, among many others. Today’s roster includes some of the top names across multiple genres of music. For more information, visit www.curb.com.