Donny Schatz wins both nights of the World Finals in Charlotte and Brad Sweet wins the National Championship for the 4th consecutive year. Both cars are Curb Cars in partnerships with Tony Stewart and Kasey Kahne.

Where Donny Schatz is good, Donny Schatz is great. The 10-time World of Outlaws NOS Energy Drink Sprint Car Series champion has proven that on multiple occasions in 2022 with the latest coming in Friday’s Feature at The Dirt Track at Charlotte.

In his 60th start at the Concord, NC 4/10-mile, the Fargo, ND native won his 13th Feature at the track in a dominating $15,000 World Finals rout. Currently amid his 26th full-time season with The Greatest Show on Dirt, Schatz has now conquered three of the five winningest venues of his career this year including Knoxville (18 wins), Volusia (14 wins), and now Charlotte (13 wins).

At 45-years-old, the driver of the Tony Stewart/Curb-Agajanian Racing, Ford Performance, Advance Auto Parts #15 is now up to 306 career wins with Friday’s being his fourth of the season and first since August, when he won his 11th Knoxville Nationals. It’s been a trying year with multiple DNFs, but there has been no quit out of the TSR camp as they’ve rallied back to fourth in the championship points.

“These guys have been kicked down in the dirt, but keep finding ways to pull ourselves out of it,” Schatz said on his season. “It’s pretty cool to have so many partners here with us in Victory Lane and we’ve got some future ones out here, too. I tried to salvage a decent points night. We’re not exactly in the championship race, but you always keep the numbers in the back of your mind and I’m battling Sheldon [Haudenschild] for fourth now. I also didn’t want to do anything silly racing with Brad [Sweet] there, you never want to be the guy to change the outcome for someone else.”

From May 2000 to November 2022, things have certainly changed at Charlotte, with Schatz, and in the world, but the #15 parking in Victory Lane in the 704 continues to remain a trend.

“We’ve been blessed here,” Schatz noted on his success at the track. “I’ve always liked this place since the beginning. It’s changed a lot, but we’ve changed with it. I’m not very superstitious, but I’m happy with that lucky number #13 tonight.”

Finishing behind Schatz with his second, second-place finish of the season was Cory Eliason, of Visalia, CA, in the Indy Race Parts #71. The two-time World of Outlaws winner experienced a unique night after blowing an engine in the Dash, quickly thrashing to make the Feature, and then nearly offering a challenge for the win on the final restart.

“It was eventful to say the least,” Eliason said after his runner-up outing. “I guess on one hand I’m glad that the engine let go in the Dash and not the Feature, that was kind of a blessing in disguise. We barely made it on track after getting it changed and firing off while the double horn sounded. It feels great to be back on the podium against a field like this; it’s getting me back to where I feel like I should be. Bernie [Stuebgen] has give me everything I could ask for in this car.”

Championship leader Brad Sweet controlled the opening four circuits of Friday’s Feature, but slipped back to finish third in his Kasey Kahne Racing, NAPA Auto Parts #49. Although “The Big Cat” remains winless through 31 starts at The Dirt Track at Charlotte, his consistency this week has extended his championship lead to 36-points over David Gravel entering the season finale.

“My car was actually really good tonight and I think we made a ton of ground from Wednesday,” Sweet said on the Eric Prutzman-wrenched #49. “We did a greta job to put ourselves in a position to contend for the win after how tonight started. I felt greta about my car, but I think I got a little conservative. We were capable of racing against him, but I kind of got caught up in the big picture and wanted to finish. There’s a lot on your mind when you’re racing for these championships. We’ll finish this deal out strong tomorrow.” 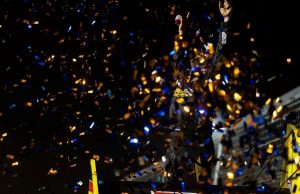 Donny Schatz’s 13th win at The Dirt Track at Charlotte puts the Concord, NC 4/10-mile oval into a tie as the fifth-winningest track of his World of Outlaws career – following Williams Grove (PA) Speedway at 21 wins, Knoxville (IA) Raceway at 18 wins, Eldora (OH) Speedway at 17 wins, Volusia (FL) Speedway Park at 14 wins, and The Dirt Track at Las Vegas (NC) at 13 wins.