(Nashville, TN) – Two-time GRAMMY® award-winning duo for KING & COUNTRY continues to reach new milestones with their latest single “God Only Knows.” The track is currently No. 6 on the Billboard Hot Christian chart and is quickly approaching an impressive 20 million total on demand streams. “God Only Knows” has already reached Top 10 on both the Billboard and Mediabase audience charts, making this the band’s fastest rising single to date. As a whole, for KING & COUNTRY is approaching a tremendous 500 million total career on demand streams. You can listen to “God Only Knows” HERE and watch the acclaimed music video HERE.

Luke Smallbone discusses the wide-reaching effect of the song’s message of hope and understanding: “I had a moment on stage during our show at the Sydney Opera House, remembering all the time we’ve put into writing these songs. I took out my in-ear monitor, took a step back and just went ‘Wow!’  To know that a song we wrote can communicate with people so deeply, especially in our home city, is one of the great privileges we get out of playing music.”

for KING & COUNTRY is enjoying great success on the burn the ships | world tour 2019, the group’s most massive to date. In anticipation of Joel & Luke’s first major trek in their homeland of Australia, the duo SOLD OUT their scheduled performances in Sydney at the famed Sydney Opera House, Brisbane, and Melbourne, forcing a second show to be added to each stop.  The world tour has already produced multiple SOLD OUT dates in New Zealand, Australia, and North America. Take an exclusive behind the scenes look at Joel & Luke on tour, featuring footage from their sold-out date at the Sydney Opera House at the link HERE. For all upcoming dates, visit www.forkingandcountry.com.

for KING & COUNTRY’s music has been getting the attention of DJs in the electronic and house genres all over the world. The group’s massive #1 hit “joy.” was recently remixed by Dutch-born DJ R3HAB, as he turned the multi-week, multi-chart smash into a club ready anthem. You can listen to the remix of “joy.” at the link HERE. 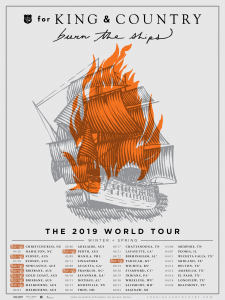 Two-time GRAMMY® award-winning Australian duo, for KING & COUNTRY, comprised of brothers Joel & Luke Smallbone, have recently released their much anticipated third studio album, Burn the Ships, a sweeping musical landscape that explores themes of new beginnings, forgiveness, hope, and love. The album’s soaring debut single, “joy,” held the No. 1 spot for consecutive weeks, marking the group’s highest debut on three Billboard charts. Their previous album, the gold-certified RUN WILD. LIVE FREE. LOVE STRONG., debuted at No. 1 on iTunes, and produced two GRAMMYs®, four Dove Awards, and a hugely successful 60-date arena tour. They have garnered four No. 1 hits, nine Top 10 hits, and had songs featured on the Emmys, Super Bowl, Sunday Night Football and other high-profile events, including performances on The Tonight Show, Today, and Jimmy Kimmel Live! In October 2016, the Smallbone brothers released the indie film inspired by their No. 1 hit of the same name, Priceless, about human trafficking.