Singer/songwriter Ruthie Collins opens the next chapter of her musical repertoire as she releases “Joshua Tree,” available today (8/16) across all digital platforms. “Joshua Tree” invites listeners into the place that many, including Collins, have called a spiritual experience. Today, Billboard is exclusively premiering the song’s official lyric video, which they describe as “picturesque.” Watch the video on Billboard HERE.

Produced by Wesley Harllee and mixed by five-time GRAMMY® Award-winning engineer Ryan Freeland (Bonnie Raitt, Ray LaMontagne, Ingrid Michaelson), the track is bathed in lush strings as a haunting melody wraps itself around wistful, descriptive lyrics that paint both a tragic love story and the real-life depth of beauty Collins has come to discover at California’s iconic Joshua Tree National Park.

“‘Joshua Tree,’ to me, is like a lucky charm, a rabbit’s foot or a worry stone that you carry around in your pocket,” Collins shares of the mysterious, dream-like ballad. “It seems to have some kind of energy that has brought some really interesting and magical things into my life. I feel so inexplicably drawn to that special place. I’m not sure if it’s the song, the story or my experiences there; but I’ve truly never known anything like it, and I’ve never written a song like that before.”

Inspired by the relationship lore between her musical heroes, Emmylou Harris and Gram Parsons, Collins co-wrote the song with Luke Sheets. Harris was said to have wanted to express her love for Parsons, but she never got the chance. Parsons passed away from a drug overdose in Joshua Tree in 1973, leaving Harris to wonder how things might have been different if she had revealed her true feelings earlier.

“As a self-proclaimed lover and writer of sad songs, I felt compelled to take on this story,” says Collins. “This song means so many things to me now. It’s not only a snapshot of a great love story that almost was, but it’s an idea that love is never truly gone, because love cannot die. No matter where you are in the world or in time, love always exists. This song is like a message in a bottle filled with that great love that you throw out into the universe. Who knows what happens next?”

“Joshua Tree” previews new music to come from Collins, whose sophomore LP is slated to drop early next year on Sidewalk Records, a division of Curb Records.

Singer/songwriter Ruthie Collins wears her heart on her sleeve, and pretty much always has a sparkle in her eyes. Citing Patty Griffin and Emmylou Harris as her primary musical heroes, Ruthie brings the same emotional depth to her storytelling, and yet, within one line of a song, you feel like you’ve known her your whole life. Praised by Billboard, Rolling Stone, and the Los Angeles Times, among other media outlets, the Berklee College of Music graduate—raised on a farm in Fredonia, NY—now calls Nashville home. But Ruthie’s heart primarily resides in the Joshua Tree National Park in California, a physical location that embodies the peaceful tranquility and warmth that is Ruthie Collins. She’s currently in the studio working on her sophomore LP, slated for release in early 2020. Her new song, “Joshua Tree”—named after her favorite destination—is available now. 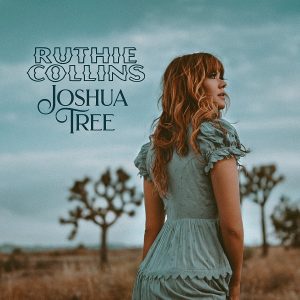