Official Video for “Have Yourself A Merry Little Christmas,” feat. Anna Graceman is out now

Pop singer Wyn Starks ushers in the holidays with a new song celebrating the season. Starks joins forces with gifted singer/songwriter/producer Anna Graceman to add a creative spark to a classic version of “Have Yourself A Merry Little Christmas.” The single is now streaming on all digital platforms, and the song’s festive music video is out now. Watch the video below.

A garage filled with nostalgic Christmas decor provides the backdrop for the clip, juxtaposed by the elegance of Stark’s retro turquoise suit and Graceman’s full-length formal gown. Their pristine vocals seamlessly intertwine as a rich orchestral section builds into a full band pop-centric crescendo.

“I had such a blast collaborating on one of my favorite classics of all time with my incredibly talented friend, Anna Graceman, and I can’t wait for you all to open it up,” Starks says of the song. “I really hope you love what we did with this classic. It’s never too early to start making your Christmas playlist!”

His Christmas collaboration with Graceman marks Starks’ third single via Sidewalk Records, a division of Curb Records, following the release of retro ballad “Circles” and up-tempo track “Dancing My Way,” which lives up to its name with its dance-worthy grooves.

For more information and all tour dates, visit www.wynstarks.com. 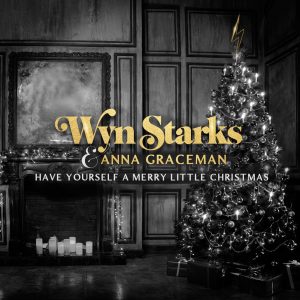 Stream or purchase “Have Yourself A Merry Little Christmas” HERE.

Influenced by iconic singers like Stevie Wonder, Michael Jackson, Whitney Houston and Prince and the modern-day brilliance of Leon Bridges, The Weeknd and Sam Smith, Wyn Starks starts with a melody and then wraps his impressive falsetto around lyrics that mirror the emotion he’s feeling in the moment, creating his own unique brand of classic cool. Growing up in Minneapolis, Minnesota, the pop singer fell in love with the Motown greats that played throughout his house and the Gospel music he sang in church. Raised by a single mom, his youth was shaped by insecurity and a strong desire to please those around him. It wasn’t until he moved to Nashville that he discovered his true identity and self-worth, both personally and professionally. His newfound confidence has shaped the music he’s crafting for his Sidewalk Records debut—a melting pot of old-school R&B, retro pop and Motown magic rooted in love, acceptance and inclusion. His new songs, “Circles” and “Dancing My Way,” are available now.