This week, four-time GRAMMY® award-winning Australian duo, and Curb | Word Entertainment recording artist, for KING & COUNTRY will be premiering their uplifting new song, “TOGETHER,” and making their debut on ABC’s Good Morning America Friday, May 1st. The duo’s trademark of inspiring lyrics and deftly crafted pop melodies are evident throughout the song, with soaring harmonies and infectious percussion to brighten your Friday morning.

For KING & COUNTRY, comprised of brothers Joel and Luke Smallbone, share, “We are very grateful for the opportunity to premiere our brand new song, ‘TOGETHER,’ on Good Morning America. It is such a humbling thought as Australian immigrants, that we are getting to perform on such an iconic, American morning show. Our hope is that with this performance, we can spread the message that if we are able to unite, and support one another during this time — be a neighbor to someone, serve someone, reach out to someone – how might those acts of kindness change the scope of our futures, together? This idea is what ‘TOGETHER’ represents. We believe what unites us is ultimately so much stronger than that which divides us.”

The No. 1 hitmakers received two GRAMMY awards earlier this year and in March, for KING & COUNTRY produced the critically acclaimed livestream event “TOGETHER: A Night of Hope,” in response to the COVID-19 pandemic, which has racked up well over 2.5 million views across all social media platforms.  To revisit the entirety of the extraordinary night, click here.

Four-time GRAMMY® award-winning Australian duo, for KING & COUNTRY, comprised of brothers Joel & Luke Smallbone, collaborated with renowned entertainer Dolly Parton to release a version of the duo’s 11-week No. 1 hit “God Only Knows” in 2019. In 2020, the duo won two GRAMMY® awards. One for “God Only Knows” (with Dolly Parton) in the Contemporary Christian Music Performance/Song category, and their 3rd studio album, burn the ships, won a GRAMMY® in the Contemporary Christian Music Album category. for KING & COUNTRY graced the CMA stage to perform “God Only Knows” with the incomparable Dolly Parton at the CMA awards, and they performed their unique and powerful rendition of “Little Drummer Boy” at CMA Country Christmas, receiving national critical praise for both. In the days following their Christmas performance, Joel and Luke Smallbone saw their previously released version of “Little Drummer Boy” undergo a 1,338% increase in downloads, a 60% increase in on-demand streams, and sat atop Billboard’s Christian Digital songs chart. They have garnered six No. 1 hits, nine Top 10 hits, six GRAMMY® nominations, three Billboard Music Award Nominations, an American Music Award nomination, and had songs featured on the Emmys, Super Bowl, Sunday Night Football and other high-profile events. National performances include The Tonight Show, Today Show, Jimmy Kimmel Live!, The View, CMA Awards, and CMA Country Christmas. The duo’s burn the ships | world tour has SOLD-OUT over 40 shows across the world including USA, Australia, Germany, Netherlands, and New Zealand. In total, for KING & COUNTRY has accumulated nearly 1 Billion on-demand streams. 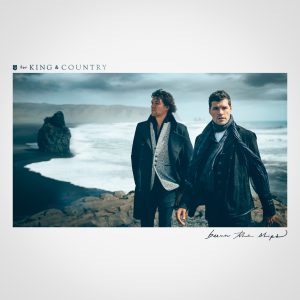