SIDEWALK PROPHETS ADJUST ALBUM RELEASE DATE FOR THE THINGS THAT GOT US HERE TO JULY 3, 2020

Curb | Word Entertainment’s Sidewalk Prophets will reschedule the release of their next album, The Things That Got Us Here, originally set to release on May 22, 2020. Due to COVID-19 concerns, the album is now set to release on July 3, 2020. Fans can hear released tracks “Smile,” “The Comment Section,” “Chosen,” “Real To Me,” and “Don’t Sweat It” while they await the album’s release.

“Due to the extenuating circumstances brought on to all of us by this pandemic, we, as a team, decided we needed to postpone the release of our new record,” shares Sidewalk Prophets lead singer Dave Frey. “This postponement is in an effort to be sensitive to the world around us and to bring you our absolute best as we release The Things That Got Us Here – an album that we are extremely excited to share with you.”

As previously announced, the band rescheduled their sold-out headlining debut at Nashville’s historic Ryman Auditorium originally scheduled for March 22, 2020. The “Great Big Family Reunion” was rescheduled for July 5, 2020. All tickets will be honored at the new date. If fans previously registered for the event via Ticketmaster’s Verified Fan platform and can no longer attend, they should log in to their Ticketmaster account to return/cancel their complimentary ticket so that any unused tickets can be claimed by other fans. More information is available at www.sidewalkprophets.com. 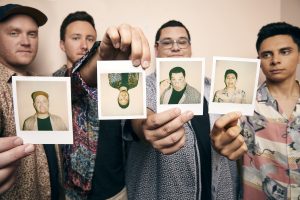