“The last two and half years, the Burn The Ships era, as we’ll call it, has been some of the most meaningful of our time as a band,” Joel and Luke Smallbone share. “There’s so much of our heart and our personal story in this album. Today represents a great celebration for us with the release of the deluxe album canonizing all of the humbling collaborations into one place as well as some of our favorite remixes.”

“Today also marks the announcement that the album has crossed the line into gold status! Mind blowing. Our thanks to the fK&C creative family – management, producers, musicians, crew, booking agent, label and beyond. After the year we’ve all faced we’re more thankful than ever to be in this with you and feel the urgency to continue to share with you honestly, creatively and inspirationally. God bless you.”

Burn The Ships has become for KING & COUNTRY’s most successful studio album to date. The record has garnered a GRAMMY award win, produced three No. 1 singles including the platinum-selling “God Only Knows,” debuted at No. 7 on the all-genre Billboard 200 Albums Chart and No. 1 on the Top Christian Albums chart, and propelled the band to their biggest ever sales week and first ever Top 10 album. for KING & COUNTRY brought Burn The Ships to national TV with performances on ABC’s Good Morning America and CMA Country Christmas, and sold out concerts across the world including in the United States, Canada, Australia, New Zealand, Philippines, and Singapore. 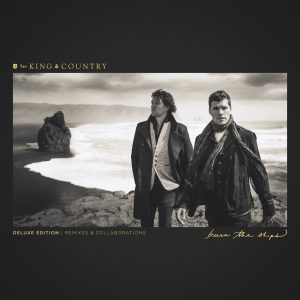 for KING & COUNTRY, comprised of brothers Joel & Luke Smallbone, have won four GRAMMY® Awards, seven GMA Dove Awards and a Billboard Music Award. All of their albums have appeared in the Top 5 on the Billboard Album Chart, including their latest Burn The Ships, which took the top spot upon its debut. They’ve celebrated seven No. 1 hits, including their 11-week No. 1 “God Only Knows” which spent 11 weeks atop the charts and featured Dolly Parton on a subsequent version. 2020 has seen the platinum-selling duo become a worldwide phenomenon. They’ve appeared on multiple sales and radio charts around the globe, appeared atop the singles charts four times in Canada and Australia and amassed over 1 billion worldwide on-demand streams. They’ve sold-out shows in Germany, Netherlands, Australia, New Zealand and of course the U.S. and Canada and their shows, critically hailed, are as jaw-dropping as they are explosive. In 2020, Joel and Luke partnered with The Salvation Army as they embarked on A Drummer Boy Drive-In: The Christmas Tour. Not only did the drive-in tour gather toys for families in need it proved to be one of the industry’s most successful of the COVID era.