Curb | Word Entertainment pop artist and songwriter Sarah Reeves drops a new version of “Anxious” today (3/26). “Anxious (Mokita Remix)” pumps up the volume on Reeves’ vulnerable song, providing the perfect soundtrack for the current anxiety-inducing season being experienced around the world as a result of the global pandemic. Listen to the timely new version of “Anxious” HERE.

“I’m so excited to have Mokita on this remix of ‘Anxious,’” Reeves shares. “I’ve been a fan of his work for years, and I love how he added new elements and energy to this song, elevating it to a whole new level.”

“Anxious” was the first track released from Reeves’ latest full-length project, Life Love & Madness. She wrote the selection with Lucas Arens following a season of personal anxiety and depression. “This song doesn’t hold all the answers, but it’s honest,” Reeves says. “Many are feeling anxious, especially right now, as our world feels unstable. The good news is, you aren’t alone. There is a God who can give you peace beyond understanding. I’m choosing to stand on that peace today. I hope you do the same.”

Moreover, Reeves, whose songs have been featured on television series across major networks like ABC, NBC, CBS, FOX and Netflix, among others, just received her first Disney movie trailer placement. Her song, “What A World We Live In,” appears in the international trailer for Disney’s Raya and the Last Dragon, now available in theaters and on Disney+. 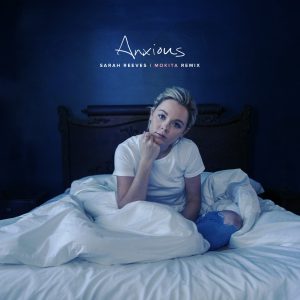 Pop artist and songwriter Sarah Reeves signed her first record deal at age 18. For more than a decade, in addition to pursuing her own artistry, she has dedicated a vast portion of her career to writing songs for other artists and TV and film. Her music has appeared in Disney’s Raya and the Last Dragon international trailer, promos for “American Idol” and UFC, and on television series across major networks like ABC, NBC, CBS, FOX and Netflix, among others. Reeves has also been featured on tracks by high-profile DJs, including Gattüso, Laidback Luke, and Justice Skolnik. Having amassed more than 46.9 million career on-demand streams, the Curb | Word Entertainment artist has garnered 22.9 million Pandora lifetime streams and over 35.8 million YouTube views to date. Sarah’s latest album release, Life Love & Madness, which debuted Top 5 on the iTunes Singer/Songwriter album chart, is available now.