“Writing songs that are true to my story has always been my goal, but there are a few special moments in your career where you write a song and feel like it literally carries your heart. ‘Even At My Worst’ does just that,” Blanca shares of the heart-pounding new single. “I walked through a divorce in 2019 that left me feeling broken and insecure about my own self-worth. It’s from that rock bottom that I was able to experience God’s goodness in such a real way.”

Blanca co-wrote the fresh track with Isabella Sjöstrand and Anton Göransson, who also produced the song.

Earlier this month, Blanca honored her Latin American heritage with the release of Renovada. Historically, the singer has naturally translated her lyrics from English to Spanish, but for Renovada, she intentionally crafted every song from the ground up in her native tongue. The five-track EP already boasts a No. 1 hit in Blanca’s homeland of Puerto Rico, thanks to the meteoric rise of “Soy (feat. Christine D’Clario).” In addition, Renovada features confident anthem “Zone (feat. GAWVI)” and “Papi Song (feat. Genio),” a tribute to her late father, Tonito Reyes, a Christian Salsero who passed away from cancer in 2011. 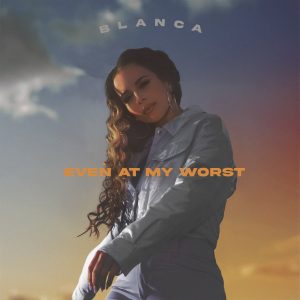 Stream or purchase “Even At My Worst” HERE. For more information, visit www.officialblanca.com.

Powerhouse pop vocalist Blanca is a New York native of Puerto Rican descent. Following a successful Dove Award-winning run with Group 1 Crew, she ventured on her own to become a solo artist. The Premios Arpa award recipient’s self-titled, debut solo album garnered two No. 1 radio singles, “Who I Am” and “Not Backing Down” (feat. Tedashii), the latter of which was featured on ESPN. Shattered, Blanca’s second album and a project that is very personal to her, added three back-to-back No. 1 radio singles (“Real Love,” “What If” and “Remind Me”) to her story, along with her 48.9 million on-demand streams and more than 28.7 million views on YouTube. She received her first-ever Tecla Award nomination in October of 2019, in the category of Best Musician Creating Social Content. Renovada, Blanca’s first project featuring all-original music in Spanish, released April 2, 2021. Blanca’s latest single, “Even At My Worst” is available now. For more information, visit www.officialblanca.com.