“I often gravitate towards the beauty and the break in Country music, probably why it’s always been my dream to experience the realness of life so openly. Writing ‘I Hope You’re Happy Now’ with Luke Combs, Jonathan Singleton and Randy Montana brought up sadness from the past but I truly hope there is happiness now. Thank you, Lee, for lending your unsurpassable voice to perfectly tell my story.”

“Carly has such emotion in her voice, especially on a song like this, that’s really powerful. I’m honored she asked me to record this duet.”

Born into the Bluegrass brawn of Kentucky, Carly Pearce has never known a moment that Country music wasn’t her destined path. At 11 she began touring and at 16 quit high school for a job performing at Dollywood. Since, she’s defied odds as her No. 1 debut “Every Little Thing,” which designated Carly as the highest charting solo female debut since July 2015 and joining an elite group of only three women to accomplish this feat the last decade. Her blockbuster ballad steered a chart-topping trifecta on SiriusXM’s The Highway that also includes “If My Name Was Whiskey” and “Hide The Wine.” Adding slots on major tours with Blake Shelton, Rascal Flatts, Luke Bryan and currently Jason Aldean, Carly has become “Country’s ‘it’ girl” (ABC Radio) while pursuit of her childhood dream. In 2018, she won both the CMT Music Awards Breakthrough Video of the Year and Radio Disney Music Award for The Freshest! – Radio Disney Country Best New Artist, plus picked up 2019 nominations for iHeartRadio Music Awards Best New Country Artist, ACM Awards New Female Artist of the Year, CMT Music Awards Female Video of the Year and is currently vying for CMA New Artist of the Year. A loyal advocate of Country music’s legacy and future, Carly has celebrated 70+ invitations to perform at the Grand Ole Opry. She is currently featured in the Country Music Hall of Fame® and Museum’s American Currents: The Music of 2018 exhibit and partnered on a new four-part video series – Unbroken Circle: Exploring Country Music History with Carly Pearce – that connects the genre’s eras.

When Lee Brice isn’t selling out arenas, writing and recording songs, or building new brands like American Born whiskey, you’ll find the family man with his wife Sara, two young boys, and baby daughter. Meanwhile, with more than 14 million in RIAA-certified sales and streams, and nearing three billion spins on Pandora, Brice continues to enjoy massive success at country radio, digital streaming services, and on the road. One of the most-played country artists of all time on Pandora, he was inducted into the company’s “Billionaires Club” on June 8, 2018, becoming only the second country artist behind Keith Urban to receive the Pandora Billionaire plaque. Lee is also a GRAMMY nominee, a CMA nominee and a double ACM award winner, and he’s taken six radio singles to Number One: “A Woman Like You,” “Hard To Love,” “I Drive Your Truck,” “I Don’t Dance,” “Drinking Class,” and “Rumor.” Garth Brooks, Jason Aldean, Kenny Chesney and others have recorded his songs, and he’s performed on numerous TV shows, including NBC’s Today, ABC’s The Bachelor, NBC’s The Voice and FOX’s Miss USA 2018. Lee’s “Rumor” is the current single from his fourth studio album, Lee Brice, released November 3, 2017 on Curb Records. The RIAA Certified Platinum single, is Lee’s sixth number one hit appearing in the top spot on the Billboard, Mediabase Country Radio, and SiriusXM’s “The Highway” Top 30 charts. It has also surpassed 250 million on demand audio & video streams in the U.S. with over 300 million worldwide. 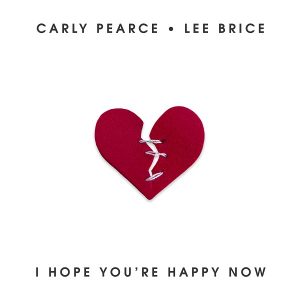 ”Carly Pearce is an underestimated force in country music, as is Lee Brice. This duet proves that both are worthy of the spotlight.”

“Two of the best voices in country music…”

“With its heartfelt lyrics and a sound reminiscent of country duets from years past, “I Hope You’re Happy Now” is destined to be a hit.”

“Built on a foundation of classic-country duets, ‘I Hope You’re Happy Now’ feels like a throwback in the best sense of the word — much like Pearce’s breakout “Every Little Thing” did…”

“Pearce and Brice are two of country’s finest vocalists, and this song will ultimately depend on their chemistry and how their audience is moved by the story they’re telling. Sure, we’ve all been there in one way or another, but if the two can put us there again they’ll score a massive hit in 2020.”

“It’s a powerful, emotive track that allows the stunning vocal tone of Carly Pearce to really shine whilst the added bonus of the rich tone of Lee Brice elevates it to exciting new heights.”

“’I Hope You’re Happy Now’ is a honey-soaked, whiskey-drenched track which makes for such a painfully truthful, raw, and real song.”