The new Christmas release comes on the heels of a busy season for Big Daddy Weave. In September, the band released its ninth studio album, When The Light Comes, featuring the chart-topping radio single, “Alive.” In addition, front man Mike Weaver debuted a new book, I Am Redeemed, while the band partnered with Trinity Broadcasting Network (TBN) to launch the eight-episode reality series When The Light Comes With Big Daddy Weave. The show’s finale aired earlier this week. Fans can watch the full season on www.TBN.org or the TBN app.

The band continues its popular “Alive Tour” this month, with a final date in Conway, Ark., on Nov. 24. Earlier this week, during a stop in Spokane, Wash., Big Daddy Weave celebrated their 21st anniversary of the day they played their first show together as a band.

Big Daddy Weave is one of Christian music’s most beloved artists. A mainstay at radio, the band has achieved multiple No. 1 singles, including “Alive,” “Love Come To Life,” “Redeemed,” “The Only Name (Yours Will Be),” “Overwhelmed” and “My Story.” RIAA Platinum-certified “Redeemed” became an anthem of unprecedented impact when it spent 11 weeks at No. 1, was dubbed “Song of the Year” at the first annual K-LOVE Fan Awards, and earned Dove Award and Billboard Music Award nominations. Their follow-up hit, “The Lion and The Lamb,” has become one of the genre’s most-streamed songs. Their current chart-topping single, “Alive,” from When The Light Comes, currently holds more than six million on-demand streams, while the band’s song catalog has an astounding 312 million career on-demand streams. 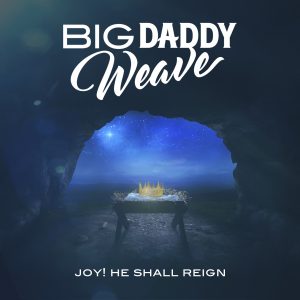 Stream or purchase “Joy! He Shall Reign” HERE.

For more info and all tour dates, visit www.bigdaddyweave.com.